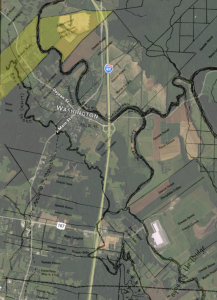 To the right is a map of landowners superimposed on a contemporary map, showing where the land which Jean Baptiste claimed was located. 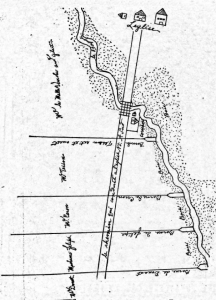 This map of the church at the Opelousas Post (now Washington, LA) was drawn in May 1780 for a land dispute. It had been built in 1774. Jean Baptiste Lapaise de Védrines and his family settled on land to the north west of this map before 1775 and were living there when this map was drawn. 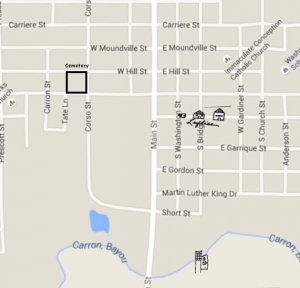 This is a contemporary map with the approximate location of the first church of the Opelousas Post (Washington), with the original cemetery. His tomb, like most, has unfortunately been lost over time.

Colonial history shows us that some soldiers deserted the French Marines along the way, while the greater part of the Marines served honorably and fulfilled their commitments, choosing afterwards to either stay in the colony of Louisiana – the option preferred by the Officials in Louisiana – or to return to France to be discharged or reassigned elsewhere.

Of the soldiers who are known to have taken their discharges in Louisiana, perhaps the most interesting, especially to genealogists, are the ones who may have established (or actually did establish) families in LA, leaving behind traces of their lives in the surviving colonial records. Such is the case with Jean Baptiste Lapaise de Védrines. All of the sacramental and civil colonial records – in both France and Louisiana – bear witness that he served the French Marines honorably, and having established a family in Louisiana, settled there to live and die, the first of the Védrines family in France to do so.