On All Souls Day, I think about the death of the progenitor of the Vidrine family in LA, Jean Baptiste Lapaise de Védrines, particularly during this 275th anniversary of his departure from France and arrival in Louisiana. From the Sacramental records, we know that he had a blessed death. The Spanish Pastor of the Opelousas Post, Fr. Joseph de Arezema wrote that the day before he died, he visited the home of Jean Baptiste Lapaise de Védrines who received the Sacraments of Penance, the Holy Eucharist, and Extreme Unction “with Particular devotion”. The Civil Records corroborate the Sacramental records. On that same day, January 14, 1788, the Commandant of the Opelousas Post and several witnesses went to his home where he expressed and signed his will. He beautifully expressed his deep awareness of his human frailty in the face of the mystery of death and his hope of Eternal Life in Christ the day before he died! What a precious heritage he has left the Vidrine Family!

“Today, the fourteenth day of the month of January in the year one thousand seven hundred eighty eight at the request of Mr. Pierre De Vidrine, retired former Officer, I, Mr. Nicolas Forstall, Perpetual Director of the Superior Court and Civil and Military Commandant of the Post of Opelousas was summoned and transported to his domicile situated in this Post where we have found the above mentioned in his bed sick, with sound mind and judgment, and making known his last wish, bothering to put his affairs in order so that he may be pleasing to God who will call him, knowing that there is nothing more uncertain than the moment of death – has declared to us in the presence of Mrs. Charles Perry, Francis Brunet and Jean Pierre Moreau:

– Firstly, he declared to us that he was born in the Roman Catholic religion, in which he would like to live and die rich in God’s grace by the merits of Our Lord Jesus Christ and the intercession of the Blessed Virgin Mary and that of St. Peter, his Patron whom he has been placed under during his blessed journey.

– Wants that his body be buried in the manner that he has discussed with his spouse, Elisabeth Moncharvaux…”

From the same records, we know that he died the next day, on Tuesday, January 15, 1788. The wake was held for him at his home and Holy Mass was offered for him the next day, on Wednesday, January 16, 1788, at the church of the Immaculate Conception at the Opelousas Post (Washington, LA) by Fr. Arezema. Afterward, he was buried in the cemetery of the Opelousas Post. Sadly, his tomb can no long be found.

Eternal rest grant upon him, O Lord, and let perpetual light shine upon him. May he rest in peace. 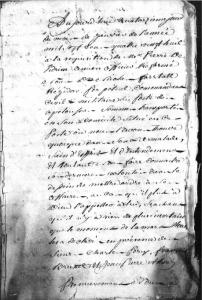 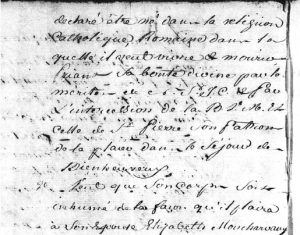