Anniversary of the Establishment of the French Marines 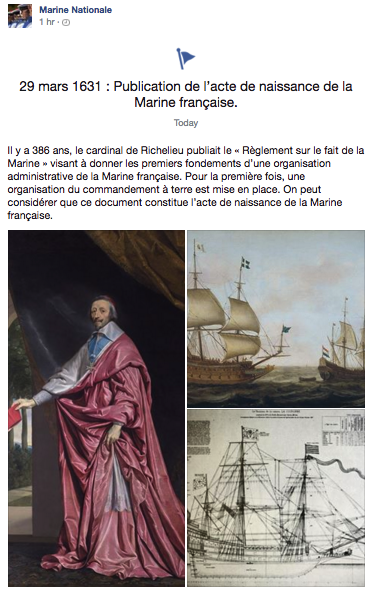 Of course, this birthday of the French Marines is a good occasion to recall the military service of the Father of all Vidrines in LA – Jean Baptiste Lapaise de Védrines – who came to the LA territory of the new world as an Officer in the Royal French Marines. He was appointed as a Cadet a l’aiguillette on May 29, 1742 and five months later, on October 29, 1742, he was listed as Cadet a l’aiguillette assigned to the New Orleans garrison. About one month later, on November 26, 1742, he was listed at Versailles on the Passenger List for the Royal ship, La Charente, destined for LA. He departed for the voyage across the sea on January 1, 1743 from Rochefort on the royal vessel name the Charente, with the newly-appointed Gov. Vaudreuil. After a brief stop at Ste. Domingue (Haiti), the Charente docked at La Balize at the mouth of the Mississippi, near New Orleans on the morning of Wednesday, May 8, 1743.

Jean Baptiste Lapaise de Védrines was at the service of Gov. Vaudreuil in New Orleans as a French Marine for eight years before being appointed to serve at the Fort de Chartres in the Illinois Territory in Upper LA. He departed New Orleans in a small convoy up the Mississippi River in March of 1751. After about three months of travel up the mighty Mississippi, he arrived at Fort de Chartres in the summer of 1751. On October 5, 1752, he was promoted to Enseigne en Second. Two years later, on June 23, 1754, he was listed as an Enseigne in a Detachment of troops under Francois de Mazellieres at IL. Four years later, he married the daughter of his Captain, Jean Baptiste François Tisseran De Moncharvaux, Elisabeth de Moncharvaux at the chapel of Ste. Anne de Fort Chartres on October 10, 1758. The next year, in July of 1759, he was promoted to Enseigne en Pied.

Ensign De Védrines and his wife bought a lot in the town of New Chartres next to the Fort on November 17, 1760, intending – it appears – to settle there. However, three years later, the English defeated the French in the Seven Years War, and in September of 1763, the Treaty of Paris was signed, granting the Illinois Territory to England. Jean Baptiste de Védrines decided to head to Lower LA, which was now under the rule of the Spanish, and friendlier territory for those who were Catholic and spoke French. He retired from the French Marines on September 5, 1763. His family moved to the Pointe Coupee Post, where they lived for about 11 years before finally settling on land at the Opelousas Post (Washington, LA) in 1777. He died there eleven years later, on January 15, 1788 and was buried the next day in the cemetery of the first church of the Opelousas Post (in Washington), which has unfortunately been lost over time. Nearly every record which mentions his name in the LA testimony mentions also the fact of his service in the French Marines.