New Orleans Founded on this Date! 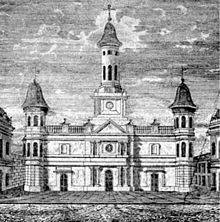 The City of New Orleans was founded on this date in 1718. French immigrants Jean-Baptiste Le Moyne de Bienville named the new settlement for Philippe II, the Duke of Orléans.

Jean-Baptiste Lapaise de Védrines (the progenitor of all Vidrines in LA) was born just a few years earlier (1712) in Ste. Livrade, France. 25 years after New Orleans was founded, he arrived there from France aboard the royal ship La Charente with newly-appointed Governor Pierre de Rigaud, Marquis de Vaudreuil on May 8, 1743. He was a lieutenant in the garrison of French Marines stationed in New Orleans, where he remained until he was sent to Ft. Chartres in IL in the Spring of 1751.

When the colony was established, a tribe known as the Chitimachas lived on a stream to the west of New Orleans, which bore their name.”