125th anniversary of the death of Fr. Fraering 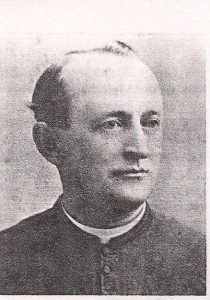 I noticed on the calendar this morning that today is the 125th anniversary of the death of Fr. Eugene Fraering. He served as the Pastor of Sacred Heart in Ville Platte after the Civil War from 1873-1878, and during that time, encountered and got to know many Vidrines, baptizing, marrying, and burying, etc, many of them. For example, these are just a few:

He witnessed the marriage of Elvina Vidrine (sister of my second great grandfather, Josien Vidrine) and Homer Andrus at Sacred Heart on March 17 1876.

He also witnessed the marriage of Artius Vidrine, Sr. and Dorseline Vidrine on March 30, 1875 and baptized their son, Jean Baptiste Vidrine on April 9, 1876 as well as their daughter, Marie Edna Vidrine on December 16, 1877.

Fr. Fraering was a native of Prussia. He grew up in Alsace, France, and was ordained a Priest in 1873 for the Archdiocese of New Orleans. After serving for a short time at St. Landry in Opelousas (August 24 to November 24, 1873), he was sent to Ville Platte (1873-1878). From Sacred Heart, he was assigned to St. Joseph Church in Gretna, LA, where he served from 1878-1891, when he died on August 20, 1891. May he rest in peace for his good and faithful service to the People of God, including many Vidrines among them.