Guillaume entered Religious Life, professing vows as a Benedictine Monk in September 1735 at the Abbey of Notre Dame de la Durade in Toulouse, about 8 years before Jean Baptiste Lapaise joined the French Marines and departed France for LA. About 10 years later, there’s a record of Guillaume as a Benedictine Monk at the Abbey of Mas Grenier (southern France) in 1744, the year after Jean Baptiste Lapaise went to LA. We find Guillaume again nearly 40 years later – in November 1783 – as a Senior Monk at the Abbey of Ste. Croix in Bordeaux. This is where he would die in August 1788, right before the outbreak of the French Revolution. Jean Baptiste Lapaise died earlier that same year in January at the Opelousas Post in LA (Washington, LA).

On November 3, 1783, Guillaume de Védrines was listed as a senior Monk of the Abbey of Ste. Croix (indicating authority in the monastery). He gathered in Chapter with the Prior and other senior Monks to make a decision about whether or not the Monks of the Abbey would offer the Mass for the dead at the cemetery of the Parishioners that year. We don’t know the particular reasons, but we do know that they decided that they would not. Surely there were some parishioners who were not very happy about this decision.

This is the text of the record:
The third of November seventeen hundred eighty five, after finishing Prime (Liturgy of the 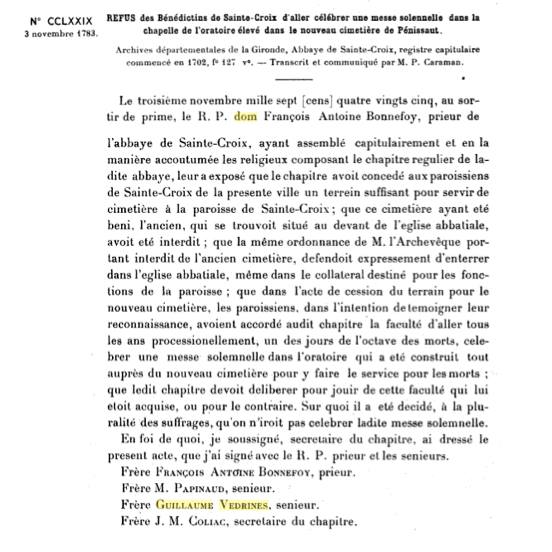 Hours), R.P. Dom (the Rev Fr.) François Antoine Bonnefoy, Prior of the Abbey of Sainte-Croix assembled in Chapter in the usual manner of the Religious of the said Abbey, explained to them that the Chapter had conceded to the Parishioners of Ste. Croix, from the present city land, sufficient land to serve as a cemetery for the Parish of Ste. Croix; that this cemetery had been blessed. The former, which is located at the front of the Abbey Church, had been banned; that the same order of the Archbishop which had forbidden burying in the former cemetery, expressly forbade to bury in the Abbey Church, and also within the grounds which served for the functions of the Parish; that in the Act of transfer of the land for the new cemetery, the Parishioners, with the intention of giving witness to their remembrances, had granted the Chapter the faculty to go every year in procession, during one of the days of the Octave of the dead, to celebrate a Solemn Mass in the oratory that had been built with the new cemetery for the service of the dead; that the said Chapter was dedicated to deliberate whether to exercise this faculty which it had been given, or not. It has been decided by the plurality of the votes, that it will not go celebrate the said Solemn Mass.