The second son of Etienne Vidrine dit Lapaise and Victoire Soileau was Zenon Vidrine, born on February 26, 1799 at the Quartier dit du Baton Rouge (Ville Platte). His grandfather, Jean Baptiste Lapaise de Védrines had passed away, but his grandmother, Elisabeth de Moncharvaux was still living. He was baptized during the summer of the following year, on

July 20, 1800, by Fr. Pedro de Zamora St. Landry Church in Opelousas, LA with Baptiste and Hortense Soileau (his maternal uncle and aunt) serving as his godparents (St. Landry Church, V.1, p.230). The church had been moved from its former site at Church Landing (now Washington, LA) and was now at the current site of St. Landry church in Opelousas and was almost brand new, as it had been built just two years before Zenon’s baptism. You can also see the note which Fr. Barriere later added on his baptism record.

In 1803, three years after Zenon’s birth, his father, Etienne dit Lapaise sold the property he had originally purchased next to his brother, Jean Baptiste Pierre at the Quartier dit du Baton Rouge (Ville Platte, LA) and bought land to the south west of his former property and moved there, which he filed a land claim for in June of 1807.

The year 1803 would also see major change as the Louisiana Purchase Treaty was signed in Paris on April 30, 1803, in which Napoleon ceded the Louisiana Territory to the United States, which would begin a transition of the LA territory from Spain to the United States. Even though Louisiana was not accepted as a State in the Union until 1812, Zenon’s growth during childhood and adolescence would be as an American, the first generation of the Vidrine Family in Louisiana to do so.

Growing up on the farm of his father, Etienne dit Lapaise, Zenon helped his father with the duties of the farm along with his siblings. Writing about this time, Dr. Francois Robin, a brother in law of Zenon’s grandmother, Elisabeth de Moncharvaux, give us a glimpse of life on the farm and life on the Opelousas Prairie in general:

“It is absolutely beautiful to see immense prairies containing and providing food for so many animals. Horses are also something quite incredible. In the Spanish parts of the state there are some that are fawn-colored, [and] which will never be domesticated since there are so many of them. Animal life in this country is quite abundant. We don’t grow wheat. I have tried several times to sow some, but I was able to succeed growing it just once. Besides that there are no gristmills. The animals roam about freely and the owners round them up whenever they need them. Each property owner has a branding iron to mark his animals. Pigs and sheep are marked on their ears. We keep the latter of these in view due to the wolves and tigers [wildcats]. In winter there are a large quantity of wild ducks of all kinds, swans, bustards, thrush, geese, and other diverse birds, that one would have to see them all in order to believe it. We have bears, of which the meat and oil are not to be thrown away. Fish are quite common and the waters clear, and in the upper part of Louisiana, the air is healthy” (22 March 1817, David Lanclos, The letters of Dr. Franc̦ois Robin 1784-1826, 2009, p. 49). 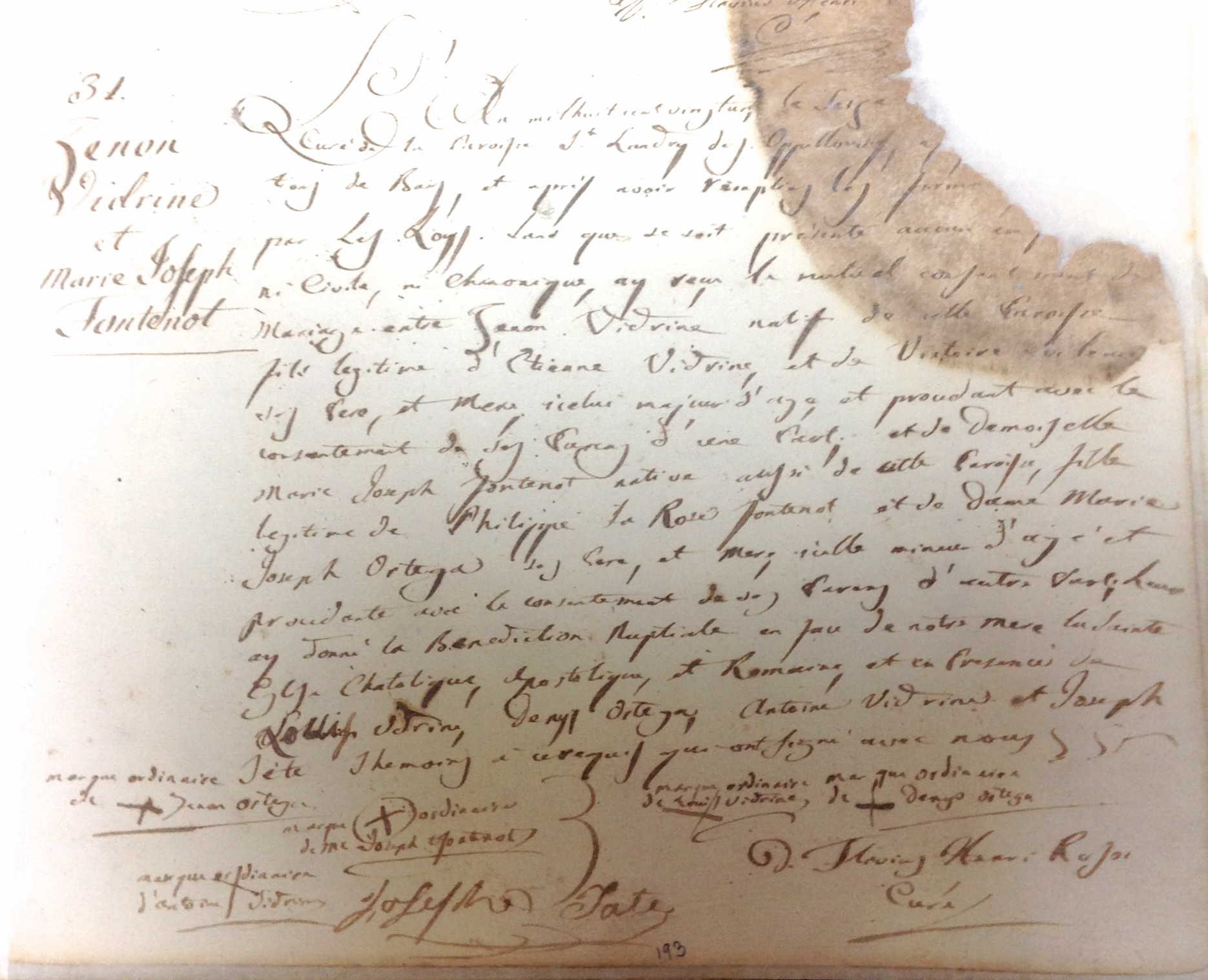 Fontenot (who was 17) were married at St. Landry Church in Opelousas, LA by Fr. Flavius Henri Rossi (Opelousas Ct. Hse. #49/St Landry Church Vol 1-B, p. 385). She was the daughter of Joseph Phillipe Larose Fontenot II and Marie-Josephe Mathilde Ortego.

Later records show that Zenon lived next to his father, Etienne dit Lapaise, at the Quartier dit du Baton Rouge, so it’s assumed that he was either given property by his dad or bought it from him either before or at the time of his 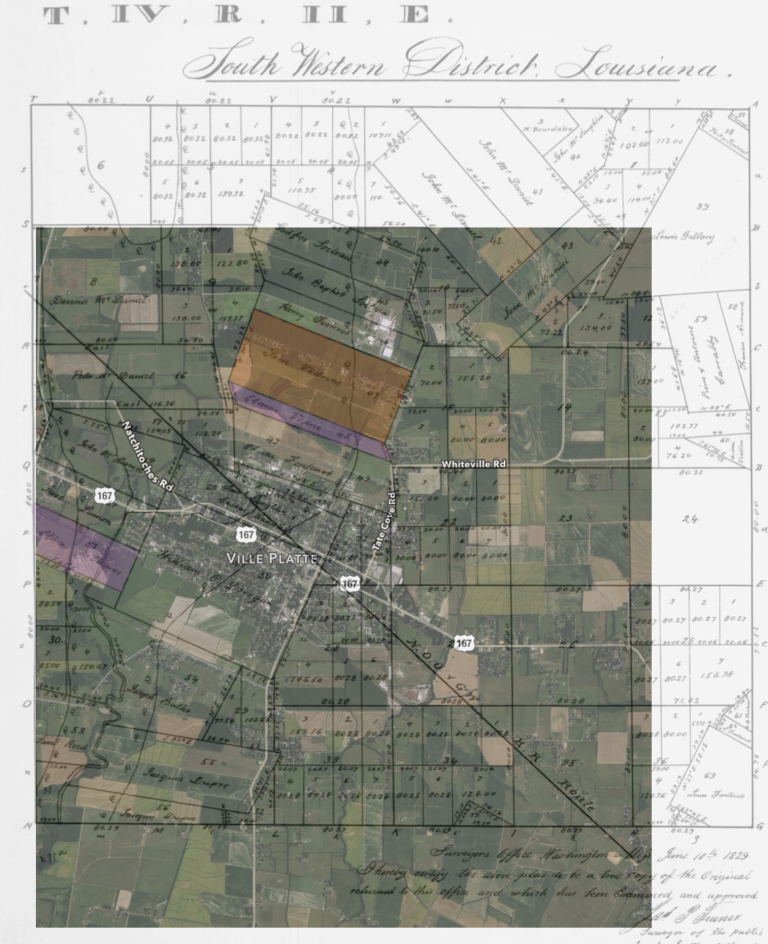 marriage to be able to establish his new family and raise his children.

Indeed, after their marriage, the children of Zenon and Marie-Josephine began to come. In March of 1824, their first child was born, Andre Zenon Vidrine. Two years later, their second child, Zenon Vidrine, Jr. was born in 1826. Their third child and first daughter, Marie Zenon Vidrine, was born in 1827. Two years later, their second daughter and fourth child, Felonise Vidrine was born on June 27, 1829. Tragically, she died about six months later, on January 31, 1830. The third daughter of Zenon and Marie Josephine, Eloise Zenon Vidrine was born later that year on August 10, 1830.

Following in the footsteps of both his father and grandfather, Zenon, Sr. made his living by farming.

The following year, in 1837, their ninth child and third son, Simeon (Mellion) Z Vidrine was born.

Five years later, the fourteenth and youngest child of Zenon, Sr. and Marie-Josephine, Ausemin Zenon Vidrine, was born in 1855. Unfortunately, he died tragically at the age of five on September 23, 1860. 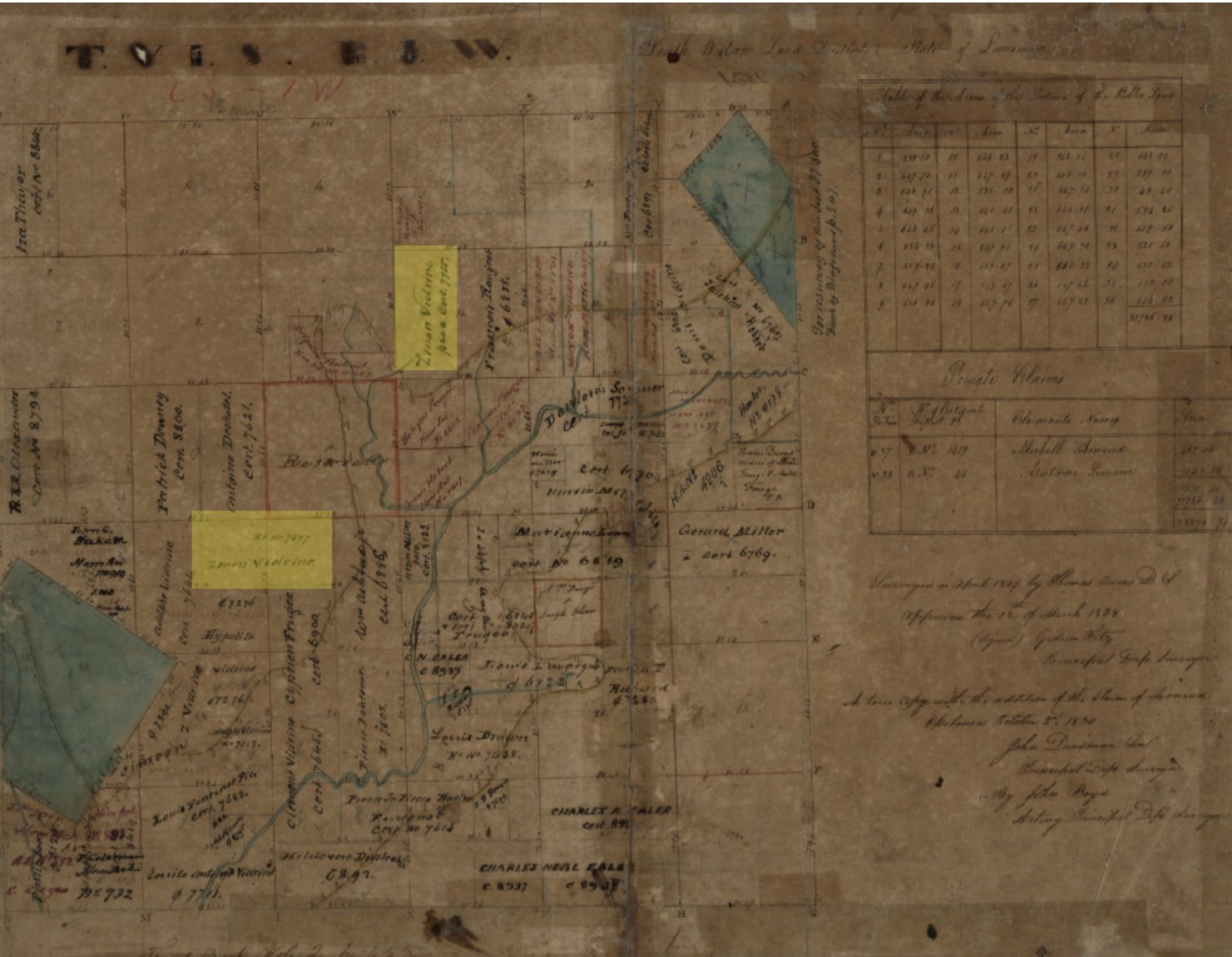 A few months after their son, Ausemin Zenon’s tragic death, and on the cusp of the Civil War, Zenon Vidrine, Sr. bought a piece of property on July 10, 1860 to the south west of Ville Platte at the Mamou Prairie (which today is Duralde, LA) containing 324.92 acres, and moved his family there. The next month, on August 23, 1860 he bought another piece of land at Duralde, LA containing 324.62 acres.

Shortly after Zenon, Sr. and Marie-Josephine Vidrine moved west to the community of Duralde, the Civil War broke out. No records of Zenon, Sr. (who was 63 years old) or his children serving in the Civil War have been found, though his nephews did, especially the 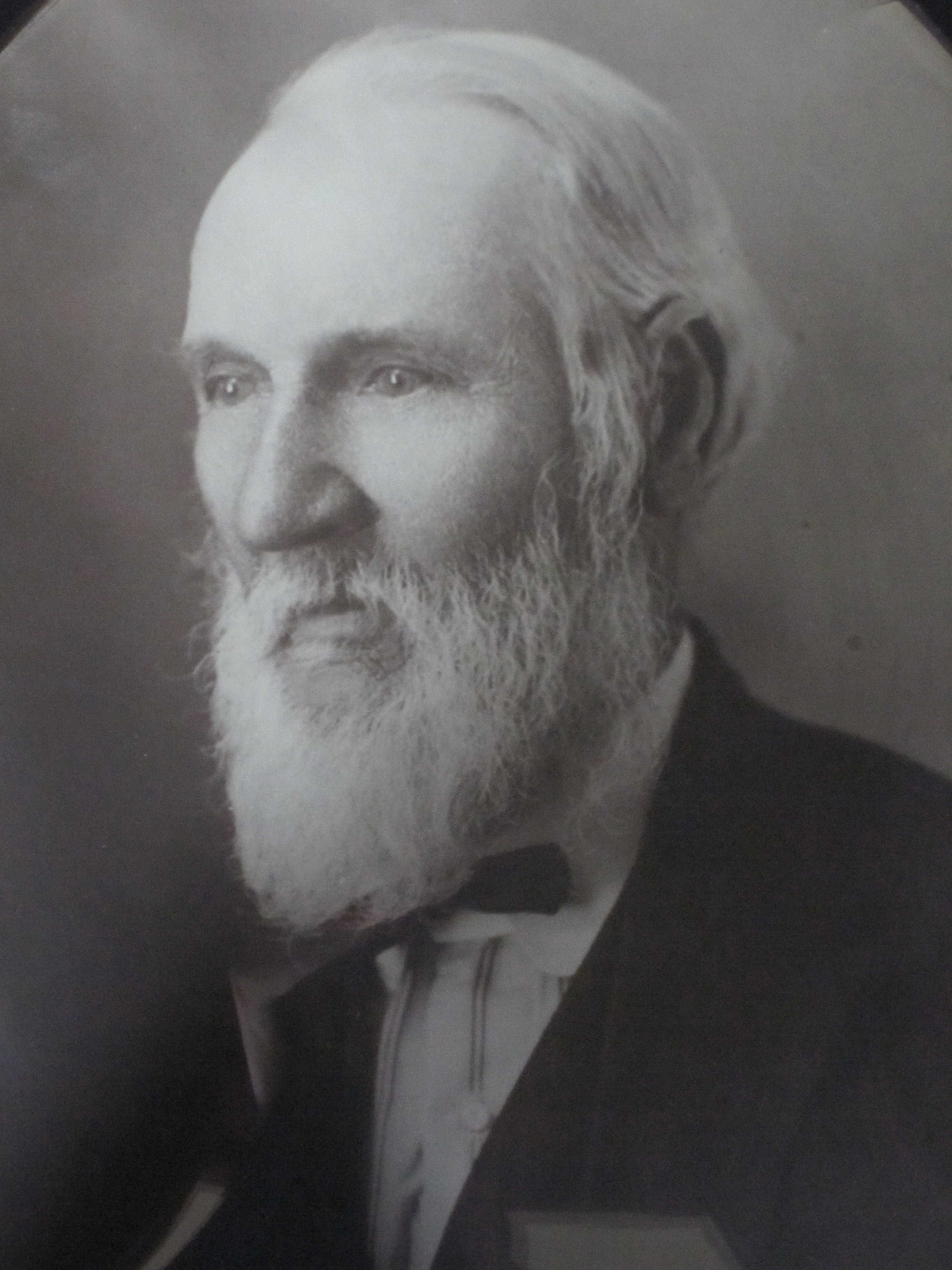 sons of his older brother, Etienne Vidrine, Jr. and his younger brother, Antoine Vidrine (pictured at right). One interesting fact, however, is that his son, Andre Zenon Vidrine’s brother in law (from his first wife, Pauline Carriere) was the well-known leader of the Jayhawkers, Ozeme Carriere. They were a band of outlaws who dodged the Confederate conscription and wanted no part in neither the Confederacy nor the Union armies, but instead went throughout the countryside of south LA terrorizing residents and robbing their food, horses, and guns.

This is one account given on February 13, 1864 by Captain H. C. Monell, the Confederate Enrolling Officer in Opelousas:

“GENERAL: Yesterday, it seems, the jayhawkers, having collected their forces, swept over the country known as Plaquemine Ridge, robbing the inhabitants in many instances of everything of value they possessed, but taking particularly all the fine horses and arms they could find. Although 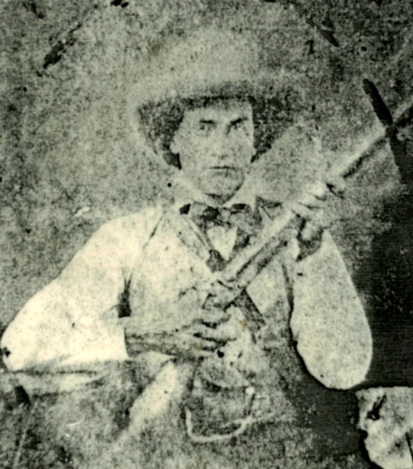 there are many of these robbers in the parish, this is the first time they have ever gone about publicly in daylight robbing the citizens. These lawless bands are daily increasing in numbers; not only are they collecting the discontented whites and free negroes, but the slaves, already demoralized by the Yankees, are going to them every day, and my word for it, unless some protection is afforded by the military authorities, all the good, loyal, and honest men in the western part of the parish will have to flee from their homes and abandon the country. It is no longer the case of a few isolated desperadoes; the entire community in the western part of the parish is implicated in these organizations. I speak not from hearsay, but from my own knowledge, when I say that Carriere is daily becoming more and more popular with them asses, and that every day serves to increase his gang. These men are making the ignorant and deluded suppose that they are their champions, that their object in pursuing the course they follow is to bring the war to a close, and tell them if they could only make everybody join them the war could soon be brought to a close. These jayhawkers, as they are termed, have stolen horses and pressed and stolen guns until they are well mounted and armed, and are now far too numerous for the limited force we have here to venture among them.

Until some vigorous measures are taken the conscription in this parish may be said to be suspended, as every man who does not desire to report has only to go within the lines of the jayhawkers to be perfectly safe from the officers of the law. The few men who report declare they will never leave home until some steps are taken to afford some security for the lives of the defenseless ones they leave behind them. In conclusion, I would say that in my opinion some firm and vigorous steps should be taken at once to rid the country of these murderers, thieves, and traitors. I am, general, yours, truly,

At this point, it is not known if Andre Zenon or his father, Zenon were in any way associated with Ozeme Carriere. However, the absence of their names among the Civil War soldiers does not rule out that possibility.

The aftermath of the Civil War was brutal for many in South LA. Many famers, in particular, lost their plantations, wealth, land and even homes. While this was the case for Zenon, Sr.’s son, Andre Zenon Vidrine, the life of Zenon, Sr. does not appear to have been greatly affected during Reconstruction in Louisiana.